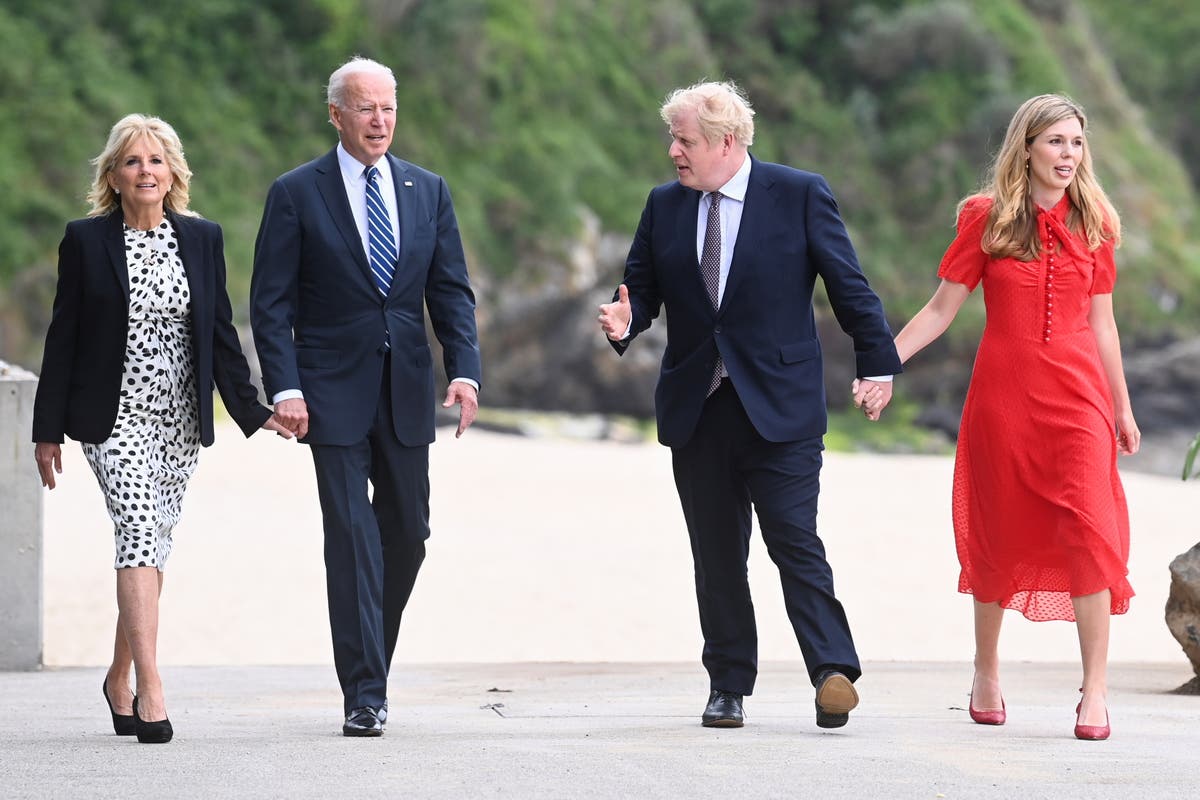 Boris Johnson has described his meeting with Joe Biden as a “breath of fresh air”.

Mr Johnson and the US president met in Cornwall ahead of the G7 summit.

At a press conference following the talks, Mr Biden said he had a “very productive meeting” and “reaffirmed the special relationship”.

Earlier, a senior US official said Mr Biden had not come to the UK to lecture Mr Johnson about the protocol and is not looking to be confrontational or adversarial.

“He didn’t come here to give a lecture,” the official, who was unnamed in quotes given to Reuters, said. “He came here to communicate what he believes very, very deeply about peace in Northern Ireland.”

Carbis Bay hotel: The Cornwall castle hosting Biden and other G7 leadersWhy does Brexit row over Northern Ireland matter to Joe Biden and what is his influence over it?EU threatens to suspend parts of Brexit agreement and warns ‘patience wearing thin’G7: Which leaders are attending, what will be under discussion and will there be protests?

Canada’s Trudeau arrives in Cornwall ahead of summit

Canada prime minister Justin Trudeau has arrived in Cornwall ahead of the G7 summit.

Photos show Mr Trudeu wearing a face mask as he disembarks from a plane at the airport near Newquay.

The gathering marks the first time the leaders have come together in almost two years due to the coronavirus pandemic, with the virus expected to be one of the main items on the agenda.

Who else will be attending the summit?

My colleague Joe Sommerland has all the details:

The hotel in Cornwall where a coronavirus outbreak has taken place ahead of the G7 has completely closed.

A sign, taped to the door of the Pedn Olva hotel in St Ives, reads: “Sorry we are temporarily closed. Access is for residents only.”

Inside hand sanitiser and a sign urging guests to wear face masks indoors can be also been seen.

US President Joe Biden said he had a “very productive meeting” with Boris Johnson.

He told reporters in Cornwall the revitalised Atlantic Charter would address the “key challenges of this century – cybersecurity, emerging technologies, global health and climate change”.

The two leaders agreed to work together on:

During his speech, President J Biden laid out his administration’s plan to donate 500 million doses of Pfizer’s Covid-19 vaccine for the purpose of donations to lower-income countries on Thursday during a speech in Cornwall, UK, as he meets with European leaders at the G7.

Joe Biden is addressing the media after his meeting with Boris Johnson.

We’ll be bringing you some of the key takeaways once he has finished speaking.

For now, you can watch live here:

Boris Johnson said his talks with Joe Biden were “great” and dealing with the new US President was a “breath of fresh air”.

The PM told reporters: “It’s wonderful to listen to the Biden administration and Joe Biden because there’s so much that they want to do together with us – on security, on Nato, to climate change.

A No 10 spokesperson added: “The Prime Minister and President discussed the importance of the relationship between the UK and the US for protecting our people, boosting prosperity in both our countries and promoting our values around the world.

“They covered a number of foreign policy issues, including Afghanistan, China, Iran and Russia.

“They agreed that the UK-US partnership was more important than ever as we tackle shared challenges like climate change and building back better from the coronavirus pandemic.

“The Prime Minister and President concurred that the revitalised Atlantic Charter published today was a fitting testament to the sheer breadth and depth of the co-operation between our countries.

“They resolved to take this co-operation further by expanding trade and progression towards a future UK-US Free Trade Agreement, a deal which would create jobs and bring new opportunities to both of our countries.”

Our politics editor Andrew Woodcock has the full report:

In 2019, Melania Trump sparked outrage while on a visit to a migrant child detention centre in Texas.

The former first lady donned a $39 jacket emblazoned with the message: “I really don’t care, do you?”

Donald Trump said it was a message to the “Fake News Media”, insinuating that he and his wife were not bothered about all the negative press they had been getting.

Ms Trump later said it was just a jacket. Who was telling the truth, we’ll never know.

Now the current First Lady Jill Biden has piqued interest with some messaging of her own.

Meeting with Boris Johnson and wife Carrie ahead of the G7 Summit, Ms Biden wore a jacket with the word “love” on the back.

Was the garment choice a swipe at the Trumps?

My colleague John Bowden has more below:

There has been a Covid outbreak at a hotel housing security staff at the G7 Summit in Cornwall, it has been reported.

Sky News’s Dan Whitehead says the hotel will shut down completely and “board up”. He adds that security for the German delegation and a US broadcaster are staying at the accommodation.

The Prince of Wales has said the G7 summit as a “game-changing opportunity” to help create a partnership between governments, business and private finance to finally tackle the “existential crisis” of climate change.

Charles’s comments were made to a group of chief executives and business leaders – including fashion designer Stella McCartney – gathered by the prince in preparation for a meeting with world leaders in Cornwall on Friday.

Meeting at St James’ Palace the prince told the executives: “We do have a potentially game-changing opportunity to drive forward the partnerships between government, business and private sector finance that are of course absolutely vital if we are to win the battle to combat climate change and biodiversity loss.”

He went on to say: “So working together, and in the closest possible partnership with governments, we can move – and actually are moving or beginning to – mountains.

“As I’m afraid I’ve been trying to say for several decades, unless we actually unlock private sector resources, innovation and finance, with the public sector setting a framework of incentives and regulation, we just don’t stand a chance of solving the existential crisis we have engineered over the years.”

Among attendees at the meeting was Pascal Soriot, chief executive officer of AstraZeneca, the Covid-19 vaccine maker.

He said: “The climate emergency is a public health emergency, for which there is no vaccine and no one is immune. The events of the last 18 months have resulted in the greatest public health challenge of our generation, but the impact of the climate emergency has the potential to be greater still, damaging our planet irreversibly. The pandemic has taught us the critical importance of collaboration and we must work together, now, to achieve change at speed and scale.”

ICYMI: Why does Brexit row over Northern Ireland matter to Joe Biden and what is his influence over it?

Joe Biden and Boris Johnson have today attempted to cool the rhetoric on Brexit after it emerged Washington sent an extraordinary rebuke to London over the Northern Ireland protocol.

Earlier today, an unnamed US source said Mr Biden had not come to lecture the UK prime minister on the subject, while Mr Johnson suggested he will not disagree with the president “on anything” as the pair met in Cornwall.

But however much both parties try to turn the focus away from Brexit, it is likely to be the subject attracting most attention over the coming days amid a “sausage” trade war between the UK and the EU.

Mr Biden has previously warned that the Good Friday Agreement must be upheld and peace not imperilled. But why is the US president so interested in what is going on thousands of miles away from his home turf?

My colleague Adam Forrest has taken a look:

Nebuliser used at Melbourne’s Holiday Inn posed a ‘high risk’The infected traveller said he was given permission to use his nebuliser. Picture: Diego Fedele/Getty Images

After a turbulent year, Canada’s energy industry braces for more upheaval in 2021