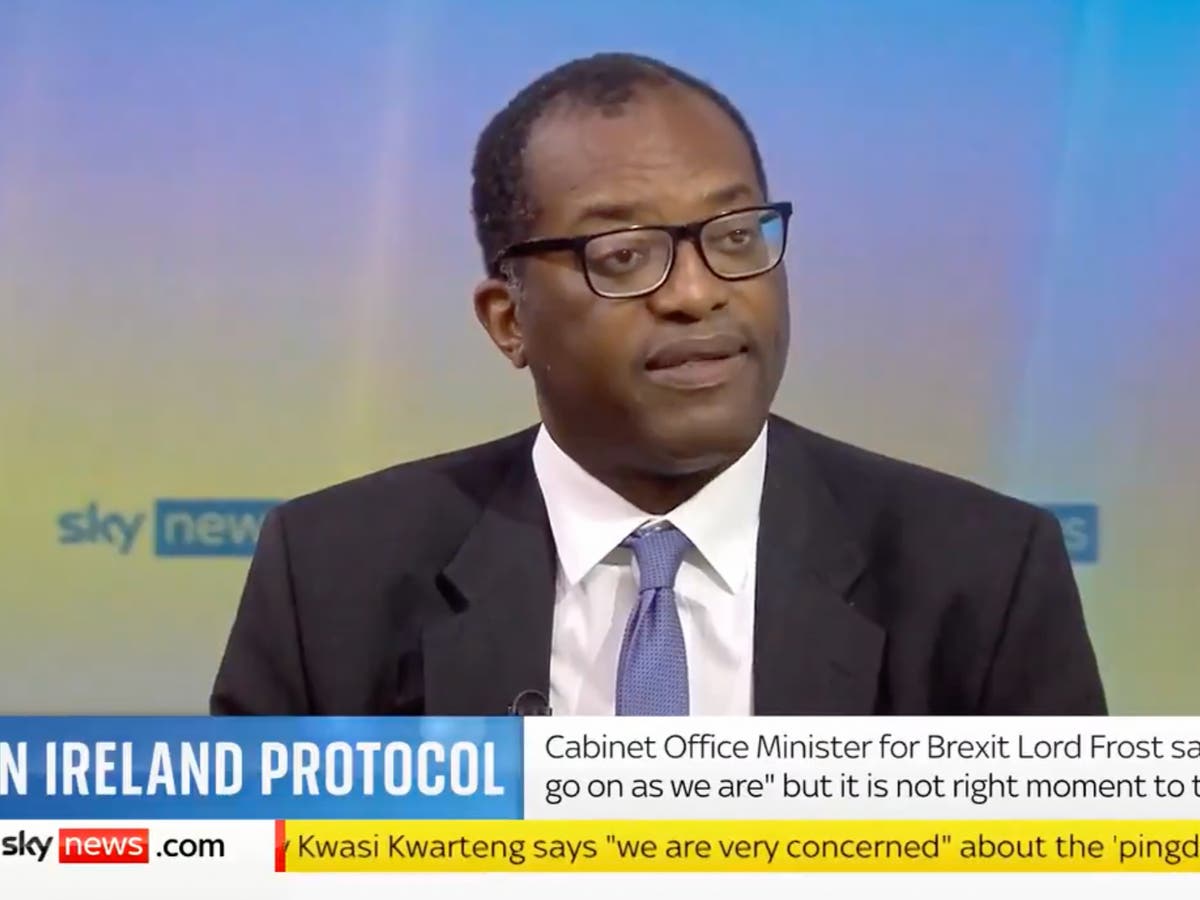 Business secretary Kwasi Kwarteng appears to have conceded that ministers did not know the full extent of what the Northern Ireland Protocol would, or could, mean for the island of Ireland until after Britain had already left the EU.

“Obviously nobody had any idea the actual effects of [the Protocol] until we left the EU,” he told Sky News earlier, adding the government had since “looked at it” and wanted to make amends. But presenter Kay Burley refuted this point. “When you said ‘nobody knew’, am I not right in saying that at least three previous prime ministers warned that this would happen?” she asked.

The Cabinet minister, correcting himself, said he meant to say “nobody could guarantee it would happen”. He went on to blame the European bloc for being “inflexible”.

Meanwhile, ministers will today announce a consultation into what slashing red tape inherited during Britain’s time as an EU member will look like. Brexit minister David Frost, who negotiated the Withdrawal Agreement, said the proposals marked the “first time in a generation” that British politicians were “free to implement rules that put the UK first”.

Starmer: ‘The Tories have become the party of crime and disorder’

More from the Labour leader now, as he pledges to succeed where his opponent has failed in “making Britain’s streets safe”.

In a scathing opinion piece for The Independent, Sir Keir Starmer writes he would “drive down crime and tackle its root causes” if he becomes PM – before accusing the Conservatives of becoming the “party of crime and disorder”.

Sir Keir launched his party’s campaign for safer communities, telling the public his party would prioritise “keeping you, your family and your community safe”.

Onlookers have already judged it echoes that of former Labour PM Tony Blair, who once pledged to be “tough on crime, tough on the causes of crime”.

Sir Keir, who is currently self-isolating after his son tested positive for coronavirus, looked to play up his own former role as director of public prosecutions as he took aim at Boris Johnson and the Conservative Party’s “failed” record on policing and crime-fighting.

Nobody could have predicted effects of NI Protocol – Kwarteng

A Cabinet minister has said “nobody” at No 10 could have predicted the fallout of the Northern Ireland Protocol until after “we had already left the EU”.

“Obviously nobody had any idea the actual effects of [the Protocol] until we left the EU,” business secretary Kwasi Kwarteng told Sky News earlier, adding the government had since “looked at it” and wanted to make amends.

But presenter Kay Burley refuted this point. “When you said ‘nobody knew’, am I not right in saying that at least three previous prime ministers warned that this would happen?” she asked.

After stumbling over his words to correct himself, Mr Kwarteng criticised the EU for being “inflexible”, adding “nobody thought the Protocol would define the role of Northern Ireland within the UK”.

NHS workers in England have lost up to £9,000 a year during a decade of pay cuts, new analysis by the GMB union suggests.

The figures were released amid continuing anger over the 3 per cent pay rise awarded to NHS workers. The GMB is now consulting members on the pay offer and will be recommending they reject the “paltry” response from the government.

“After 10 years of pay cuts, a pandemic that saw NHS staff put all their lives at risk and now a pay offer from the Government that amounts to taking yet more cash from their pockets, it’s no wonder moral among NHS workers is rock bottom,” GMB national officer Rehana Azam said.

He added sternly: “GMB will be recommending members turn down this paltry pay offer. Ministers need to think again.”

An NHS boss has signalled the service supports its staff, saying it has an “enormous amount of sympathy” for them, over the way their pay rise “has been handled this year by the government”.

Danny Mortimer, chief executive of NHS Employers, told the BBC this morning leaders were “relieved it’s 3 per cent, not 1 per cent” but added: “The key question is, is the government going to fund this pay award properly?”

“We’re also worried about the longer-term, what does this mean in terms of the attitude of staff and unions in future years around pay awards?” he said.

Boris Johnson “flunked” his opportunity to define his government’s flagship levelling up agenda which risks becoming an “everything and nothing policy”, MPs have said.

Levelling up was a term coined when Mr Johnson entered No 10 and was heavily pushed during the 2019 election as a way of closing regional inequalities and “improving everyday life and life chances”. But it has since been used in relation to tackling a number of issues including addressing racial inequalities, disability rights, and tackling antisemitism.

Releasing a report on the policy on Thursday, Labour MP Darren Jones, chairman of the Business, Energy and Industrial Strategy (BEIS) Committee, said: “Levelling up was a major part of the government’s offer to the British people at the last election, but it appears every possible funding stream from government – be it about bus stops or football pitches – is labelled as for levelling up.”

The BEIS committee said it was their view that levelling up meant “the spreading of economic and social opportunities more evenly across the country”. But the panel added it was unclear who was responsible for delivering on it.

It comes after the PM’s heavily criticised speech at the UK Battery Industrialisation Centre in Coventry last week – which was billed as a major bid to define his vision for the UK – panned for providing little to no new detail on levelling up.

Mr Jones will deliver a statement on behalf of the BEIS Committee in the Commons just after 1.30pm today.

Here’s a look at what’s going on inside Westminster today:

12.30pm A statement from schools minister Nick Gibb on awarding qualifications in 2021 and 2022

Matters to be raised before the forthcoming adjournment

A short debate on the review of the Gambling Act 2005

1.30pm Priorities for the Cop26 conference

1pm A statement on changes to international travel rules

A statement on the NHS

A debate on the Public Services Committee report, A critical juncture for public services: lessons from Covid-19

A debate on the European Union Committee report, The future UK-EU relationship on professional and business services

A statement on tackling violence against women and girls

Reforms – including proposals to streamline regulations – designed to slash red tape inherited during Britain’s decades as an EU member will be put to consultation, ministers have announced.

It marks an initial response to the report by the independent Taskforce on Innovation, Growth and Regulatory Reform (TIGRR), which was commissioned by Boris Johnson and chaired by former Tory leader Sir Iain Duncan Smith.

Suggestions made by Sir Iain’s taskforce included calling on the government to enable companies to trial innovative ideas safely by lifting certain regulations to allow new products to be tested in a real-world setting under the supervision of a regulator – a style of experimentation dubbed the “sandbox”.

Other proposals to be consulted on include bringing in tougher scrutiny of proposed regulations to ensure poor measures do not become law and reviewing new additions every two years, rather than every five.

“Now is the time to think boldly about how we regulate, as we seize our new opportunities as an independent nation,” Lord Frost, who negotiated the Withdrawal Agreement, said. “For the first time in a generation, we are free to implement rules that put the UK first.”

He added: “Reforming the way we regulate will be a big part of delivering that for people.”

The main nursing union is to consult members on possible action, after the government announced a 3 per cent NHS pay rise which the Royal College of Nursing said amounts to a cut after inflation is taken into account.

The Department of Health said the rise will be worth an additional £1,000 a year to the average nurse in England, while many porters and cleaners will receive around £540.

It amounts to a significant improvement on the government’s initial offer of just 1 per cent for NHS staff after a year in which they have been under intense pressure because of the coronavirus pandemic. But while it is higher than the current rate of inflation, the RCN – which had demanded 12.5 per cent – said it would soon fall behind the expected increase in prices over the coming months, leaving nurses worse-off overall.

Good morning, and welcome to The Independent’s rolling coverage of Brexit and all things UK politics. It’s set to be a busy day as NHS nurses consider striking over the government’s offer of a 3 per cent pay rise, so stay tuned.